At the beginning of November, my daughter and I began the quest to find a table for our kitchen.

In 2011, we had packed up our house and moved to Arizona where we thought we would reside indefinitely. Within 11 months, I was back to where I started, however, I had given away my dining room table and six chairs. I had put all of it under a tree on my boulevard with a free sign. A lady came to my door and asked,

“Is that really for free?”

“Yes, I am moving and it is just too much to take with me.”

“I need a table just like that.  I have six kids and can’t afford one right now. Is it okay if I have a friend help me haul it to my house?”

I ended up standing guard by it until she returned. As it was being loaded up into a truck, she had tears in her eyes.

“Now we can have a meal at a real table with chairs.”

After moving back to my house, we ‘temporarily’ filled in the space by putting up a long white plastic work bench. It served its purpose for longer than it should have, and six years later, we couldn’t stand it anymore. It was a good place to lay a purse, work on a project or throw junk mail, but without enough chairs, it certainly was not a table to have a meal or gather around regularly. It had really become an eyesore.

Off we went one Saturday to find the replacement. I learned quite quickly how to spot the hovering sales people. I would see a clipboard and suddenly my pace would go into turbo speed, and I would weave in a pattern much similar to what I have heard survivalists teach if you don’t want to get shot. If you move fast enough, and change direction repeatedly, you have a better chance of not getting hit.

I did find myself trapped on one occasion. I think I got so wrapped up in looking that I didn’t see him coming out of my peripheral vision.

“Do you need any help with anything?”

I gave the customary response, “No, we are just looking today.” Smile.

I really don’t mind having help when I need it, and I know he needs to make a living, but sometimes I feel like I cannot have a moment just to contemplate and think as we were shopping.

He nodded politely and said,

“If you need me for anything, let me know.”

I assured him that I would as she and I continued to browse.

Less than five minutes later, he was back by my side. This is when I really had to paste on a happy face because I don’t like to be pressured.

“Anything yet?” He inquired.

“No, we are still looking,” I said less enthusiastically.

Putting his clipboard under his arm so he wouldn’t drop it, he put both of his hands together in the form of a prayer. He slightly bowed and said,

“Your journey continues then.”

I expected a gong to sound as if I was on an episode from the old 70’s show Kung Fu.

“Yes, yes it does,” I said trying not to laugh because he was being serious.

Many furniture stores later, and two Saturdays lost, I said to my daughter,

“We are done looking. The table needs to come to us. God is going to have to send it to us.” She agreed as she was not enjoying the search any more than I was.

On the Saturday night after Thanksgiving, I came home and put on my comfy new pajamas, got something to drink and plopped on the couch ready to relax. The big meal was over, I had gotten some baking done over the weekend, and I was ready to be quiet. I started watching a show I had recorded while my daughter was sitting in a chair working on her computer.

I suddenly woke up with a jolt to my own loud snore! Very unladylike, but the fatigue was real.

“Darn! I have missed part of my show,” I said. Just as I was reaching for the remote to rewind, a furniture commercial came on.

I saw a table and set of four chairs.

“Hey! Have you looked into this place?”

“No,” she said. I rewound the commercial which was quite short so we could see it again. Had I not woken up, we would have missed it.

We both went online and saw that they were having a sale that ended the next day, so we agreed that it would be worth the trip.

Interestingly, no salesperson greeted us at the door. We zipped over to what we both knew we would like and took a few moments to admire it and picture how it would look in the kitchen. I had to track down a lady for help.

Less than 24 hours later, a table and four chairs had been purchased and ready for delivery.

I realized that while I was not paying attention, literally snoring on the couch, the table and chairs had indeed found us. Instead of sweating it out searching, I had just thrown up a request before heaven, and my prayer was answered.

The set was delivered today, and as the delivery guy put it together he said,

“This is a nice table.  I don’t know why they discontinued it.  You aren’t going to find this one again.”

He didn’t know it had found me.

How much more could be accomplished on our behalf if we would just ask, rest and trust? Our loving Creator tells us to freely come to the table. 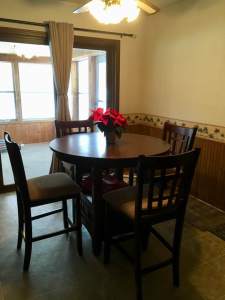