I watched her don a pair of gloves as she added the black mixture into the washing machine. Next came the white sheets that were immersed into the murky swirling water.  When she closed the lid she said,

“Now we just have to let it sit for awhile and see what happens.”

Later when we checked back after the cycle had run through its rinse and spin, we found that the sheets had transformed themselves into an off white color.  Not exactly the dark of night she was going for.

“I guess I have to do it again,” she said as she reached for the box of dye and gloves.  There would be no trips to the store to buy a manufactured costume.  She was of the era that a person scouted around the house, found some odds and ends and an outfit was made.  Even if it was a struggle.

Another round of treating the fabric with dye only led to a deeper shade of grey.  She continued this process over the next few days in an attempt to get the cloth to come out looking like coal. She finally gave up by saying,

“You will be the witch that doesn’t wear black.”

Next came the dreaded measuring and the pins.

“Fold sti..” which meant ‘hold still’ while she spoke with a push pin in her mouth.  She carefully closed up the garment around me.  I felt the prickles on my skin which gave me a mental image of going to the doctor and the ‘pokey’ things there never were my favorite.  I had no problem not moving one millimeter.

Once she was satisfied with the material being in place, she said,

“Carefully slip out of it now.”

I took a breath and tried to contort myself without messing up her work. The minute I was free I was glad to be back in my normal clothes that didn’t scratch my skin.

After a few more fittings, Halloween arrived, and I was required to wear the costume to school for a party.  I walked home at noon to eat lunch and was expected to return by 1 pm in full regalia.  After buzzing through my meal with excitement, it was time to step into my attire she had labored over. I hadn’t tried on all the pieces so I was curious to find out how I would look.

I threw the disappointing grey smock over my clothes which she secured with a rope for a belt, then she handed me a hat and a pair of black plastic glasses.  Quickly, I ran to her full length mirror to see her masterpiece.

I didn’t speak as I stared at my reflection.

“Isn’t it great?’ she said enthusiastically.  I remained silent.  She noticed.

I removed the glasses and the hat so I could see my real self again.

Picking up on my reluctance to wear it she said,

“Are you scared of what you look like with it on?”

“Well, you won’t see yourself.  Put it on for fun. You can’t go back to school in grey sheets otherwise no one will know what you are dressed up to be.”

That would have been fine with me.  Even though I was only seven years old, I had heard enough about witches, how they treated people and how society viewed them. In every book and cartoon they represented darkness, spells and performed acts of unkindness towards humanity.  I suddenly realized I didn’t want to portray myself that way.  The hatred toward my outfit was growing.

“You don’t want to miss the party, do you?  You have to wear it.  I don’t have anything else.”

We had been pumped up for weeks on the promise of a party with treats at school. Was I going to throw all of that away?  I begrudgingly pulled myself back into witch mode and slumped off to school.

Once back in my classroom, I noticed other girls were dressed as beautiful princesses or fairies.  It only made me feel more self conscious of my less than friendly appearance.  Like a vampire, I avoided my reflection so I wouldn’t scare myself.

“Line up everyone,” the teacher announced.  “The parade is starting.”

Each room of students was expected to march around the premises to show off for the parents who came to watch.  I went through the motion of walking as people waved and smiled.  I kept my head straight down not wanting to glance up.  Not even to look at my own mother.  I trudged around that building like I was going to a funeral.

When I got home, I cast aside the afflicted garments and sat in front of the tv with my pile of pre-trick or treating treasure.

After gulping down dinner and dusk turned to night, I grabbed my bag to ready myself for the big haul of the year.

“You have to put your costume back on so we can take a picture.”

The air suddenly left the room.  The witch costume!  I had felt so good without it on that I forgot about it.  I did as I was told and my dad got out his camera to snap a picture of me and a neighbor girl.  My mom made me hold a small broom just to add to my misery.  I smiled with the idea of getting it over with quickly. While she thought I was in full cooperation, I was mentally formulating a plan.

As we made moves toward the door, I took off the hat and glasses.  I was not going to tromp through the neighborhood portraying myself as something I did not like. I would rather have people think I was a monk or a nun without her habit than subject myself to having others think I was a practitioner of the dark arts.   My mom tried to stop me but I was too quick for her.  I felt I had done my duty for the day and now it was my time to free myself from the shackles of sorcery.

In the years to come, I was a scarecrow, a farm girl and a gypsy.  I became wise that Halloween in 1975 that who I was at heart did not match the image of a witch. I didn’t even want to fake it for one night.  I no longer passively let her pick out what I was going to be, but instead, became involved in the process from start to finish.  It was a lesson that all of us have to learn at one point or another.  If we don’t take a hands on approach in life, we just might find ourselves trying to be something we are not.  That was the last year I ever went trick or sheeting. 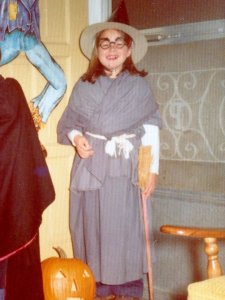 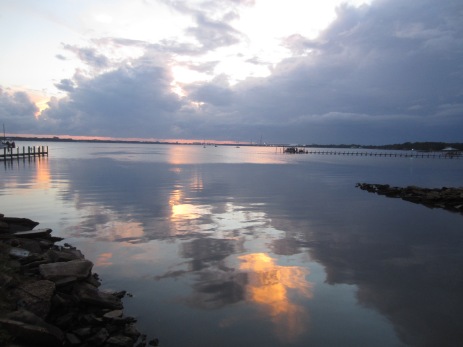 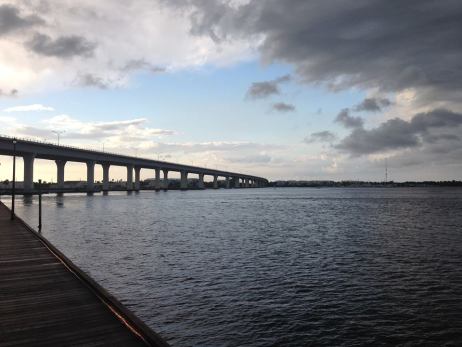